A Nintendo of my own

Disclaimer – I went to a Nintendo event where I was gifted a Nintendo 3DS. No other compensation was given, all opinions are my own.

We’ve always had Nintendo products, my husband and I. Our Wii use was long established before children, as we challenged our friends after a few drinks to make it even once around Rainbow Road without falling.

It was a social things, it was “self care” tune out time in a busy new world, and it was a way to connect by beating each other in bowling.

Then came the inevitable, and soon I was moderating while other people played the games, and any game time I had I had two little heads fawning over my action, commenting and grabbing buttons.

You just give up, you know?

Our 3DS we were given earlier this year was a blessing, as my iPhone was fought after often, my phone filled up with random games and the Wii U handheld was the controller of choice for every.single.game.

I never got to play it. NEVER. Sure I had accounts, but it was the one I shared with the three-year-old. He killed the lives and deleted the progress often, making my avatar malformed and bespectacled, robbing me of any advancement in the game.

One evening,I sat around with several other women furiously pushing buttons in Mario Party Star Rush and getting to actually compete and play.

Oh be still my beating heart.

All of them were commenting on how long it had been since they played. After all, we were the first generation of ‘gamers’, shoving our plastic guns up to the screen in Duck Hunt, arguing if Mario Bros. 2 or 4 was the better game, and we grew up in a time where the Ocarina of Time reigned supreme.

And now, as parents, we spend our gaming time after they go to bed if we don’t have freelance work of dishes or laundry to do. And we sit up on our phones mindlessly scrolling social media and turning our brains back on instead of off.

Bonus points if you know the movie playing. 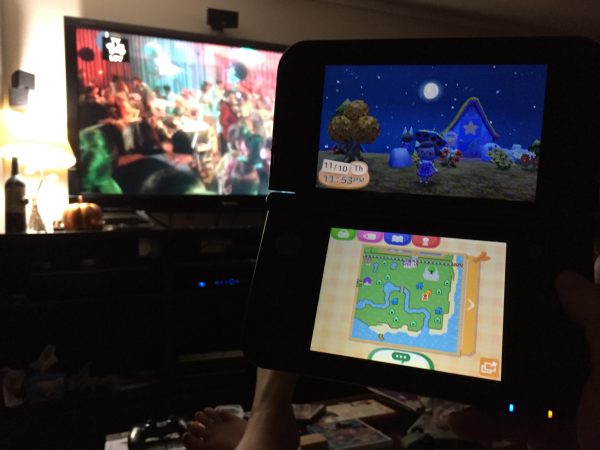 But, with your own little system, you don’t have to wait.

My husband has become obsessed with Animal Crossing: New Leaf, and his anime-esque McMansion is elaborately decorated and the museum brimming with ocean specimens.

Mine? I’m looking for the patchwork bed to finish my masterpiece, and often collect flowers to decorate my seashell-bedecked home.

The best part about a 3DS set aside for the parents is I don’t have to wipe crusty drool and fingerprints from the screen before starting. Having a 3-year-old with a passion for Kirby can be tough on the immune system if you share a system.

And instead of turning to Facebook to tune out, instead you can really tune out the drama and horror of the current days and self-care with a cute game with adorable music.

It sounds silly in this day and age, for some, to turn back into video games. But you already have little game apps on phones, and maybe on your laptop, so why not invest a little in you?

And by a little, I mean $100 bucks, if you’re a Black Friday shopper. They’ll have a special 3DS out that is Super Mario-themed with cute little stars and coins and Koopa Troopas and all that. But it comes out on Black Friday.

So ask Santa for 3DS for yourself under the tree, and let your kids have that Wii all to themselves again. Or get one for the kids and treat yourself to a pretty Galaxy 3DS XL. I love mine and its easy to recognize it as an ‘adult’ system. Even my three-year-old knows he has to put the cartridge in ‘their’ system if its in mine when he wants it.

No sharing, unless we’re desperate in the car. And I can steal it away from Daddy.