Do me and California a favor…

Megan Bigger Things Than Me, Me, Myself and I ca, conservation, drought, water 1 Comment

… buy yourself a reusable bottle.

A couple of months ago I got a big Contigo bottle from Target to keep water in while I am in class, since the classroom rules are no food or drink because of the equipment.

It seals well and I easy to carry, I love it.

And it mean I don’t have to run by a gas station to grab a drink on the way to class.

Not only is this cheap in money, it’s cheap with water.

And that’s how California has to think now.

We’re in a huge water drought, one that affects vegetable prices, farmland, and some areas are having to have water brought it because streams have run dry.

he State Water Project, which supplies 25 million Californians, anticipates being able to provide only 20 percent of the supplies for which its customers contract in 2015. via CA Dept of Water Resources

The California Department of Water Resources (DWR) found no snow
… during its manual survey for the media at 6,800 feet in the Sierra Nevada. This was the first time in 75 years of early-April measurements at the Phillips snow course that no snow was found there.

There was a state order to conserve 25% water this year.
Take away 25% of what you use in your home. Could you do it?
I am already working on cutting own resources – timing my showers, cutting back on dishwashing and carrying that water bottle everywhere I go.
My kids carry a bottle wherever they go too.
And you can do the same for me.
For California.
How does carrying a water bottle help us? 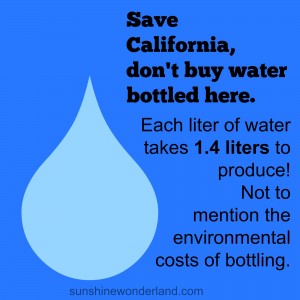 Bottling takes away municipal water and water from natural sources, like springs, to bottle and sell.
It takes more water than just in the bottle to manufacture each, including water cost in the processing plants and to drill the oil to make plastic.
And many of these bottling plant and water sources are in places of severe to exceptional drought.

One of the places Starbucks’ Ethos water is packaged is in Merced, CA. It’s up there is that dark red area.
So that $2 bottle of water you’re buying? A few cents may be donated to charity, but what are you going to be paying for later when areas in California run out of water (it’s already happening, by the way. ).
And several other brands are in California bottling water and taking away from us.
I can look up from my house and see the dry mountains beyond, where beetles have already decimated the tree population and fire season comes earlier every year.
Arrowhead water comes from up there, bottled by Nestle. It was even reported last month that they had been bottling without permit since 1988 due to oversight from the forestry service.
So who knows how much they’ve been taking and how its affected us there last few years of drought (yes, this isn’t the first one).
Mother Jones reported that several brands bottle in California, including Arrowhead, Aquafina, Crystal Geyser and Dasani. Check out the article, it has a map showing exactly how many places are still bottling in areas of extreme drought conditions.
Back to what you can do.
You can buy a reusable bottle to carry your water in this year, whether or not you live in California.
Because bottled water is full of false claims, anyway.
Get a cute bottle, a big or little bottle.
Label it, paint on it, get an aluminum one, BPA-free or glass.
Whatever.
Make it your fashion statement.
If you have a water filter as I do, your water is probably safer and better than what you’re buying  – better for the environment, better for your health.
And better for California.