In the name of health, I wear a FitBit

Megan Food, Games, Apps and Tech, Lifestyle, Me, Myself and I, Word of the Year fitbit, health, review 0 Comments

I’m adding in the potential count on the stairs – which doesn’t always count as a  set of stairs because it has a turn int he middle that has kept it from turning into a jumbo slide for the kids and saved me countless times in the middle of the night as a trudged down groggily to mess with the heater. 13 steps.

It might hurt because I slipped and stretched the same knee I banged ice skating at Santa’s Village a few weeks ago.

Hiking Corona’s Graffiti Falls on Sunday was just a little too hard for a three-year-old, but just enough for an adventure that left both boys scraped, bruised, thoroughly dirty and exhausted and happy. I mean, boys.

It could also hurt because I spent the evening in the middle of a sports park with three random guys with pretend lightsabers learning about a Lucas Film Ltd. – sanctioned exercise group that uses lightweight aluminum and Star Wars knowledge beyond trivia capabilities to work on staying fit.

It was pretty darn cold in that park, but I got 28 minutes of walking around looking for them, then walking with them on a warm up as they argues the nerdiness of Star Trek and talked roleplay and local theater’s surplus of female actors.

Two laps around the house got me 50.

My husband keeps telling me to shake my arm a lot for steps, and I just checked to see if typing has accidentally given me a couple.

Swinging my arm doesn’t work either.

I feel like a dork strolling around the house, and it depresses me as I see the amount of chaos that has built up as I crammed in some major time for a work project on a solo parent weekend.

Thank god for Disney Infinity. Disney, I still hate you for discontinuing it.

I decide to buy a FitBit after figuring out probably how out of shape I was. I mean, it wasn’t a surprise – I’m at my heaviest weight, several pounds heavier than when I found out I was pregnant with my youngest.

I also wanted something that would track my whole health. I needed to know what my body was doing in reaction to stress, and have a way to track sleep.

I decided on a FitBit Charge 2 after a lot of deliberation and noticing a quick deal that made my choice of the fancier rose gold a splurge worth doing. I mean, it’s cute right? SO cute.

I loved the fancy styles of some of the other ones that were watches first, trackers second – but they all had reviews of missing steps and innacurate readings.And I needed this to do its job.

I’ve been playing with it for almost 2 weeks, and its definitely got what I need. There’s a mode where it track 2-5 minutes of deep breathing along with my heart rate, and I have a couple Fitbit friends who have set me up with challenges.

I’m using the FitBot app to track water, but not always since my sleep, since finding out how bad I sleep is depressing. 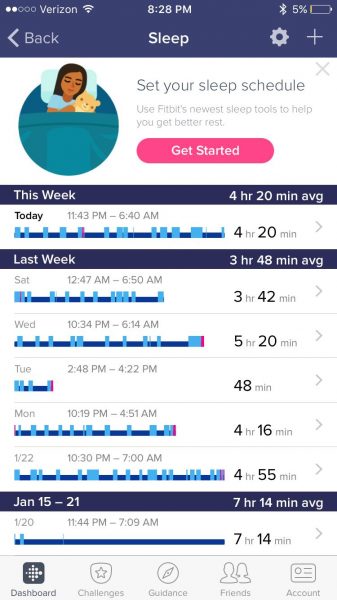 I know I’m not alone, but does anyone else get as little rest when they sleep?

I have considered asking my husband if this is accurate, since I have been known to toss enough I whack or kick him in the middle of the night. I always say I was running from zombies. I think i usually am in those dreams. I stopped watching The Walking Dead but they persist.

So here I am, my little health coach and eye-opener on my wrist, letting me know exactly what I’ve been doing wrong – too much fat and carbs, and not enough exercise.

And two little boys that run up and tap on my wrist repeatedly until they bring up the display and read out the step total. I’ve thought more than once of strapping it on them to see how many THEY take in a day – I think its a million. Do Fit Bits count to a million?

I bet there’s a badge for that.

Who wants to do a challenge with me on FitBit?

Plan for a Cheap Valentine’s Day Now Instead of tearing women down, lift boys up in public school