Disclaimer: I was sent product to review. No other compensation was given. All opinions are my own.

For a few years now pizza night has been a kids-cooking-dinner project. Both of the boys have been helpers in the kitchen since toddlerhood, enough so that they have their own whisk and wooden spoon to help make stuff.

But for pizza, I was doing all of the heavy work or helping them smoosh out the sauce with a spoon.

When Curious Chef sent me their pizza set, my youngest immediately took it over as ‘his’ which ended up a heated, um, debate between the two.

I knew it could only be settled by one thing – making a pizza and showing him the fun new stuff was cooking utensils, not toys. 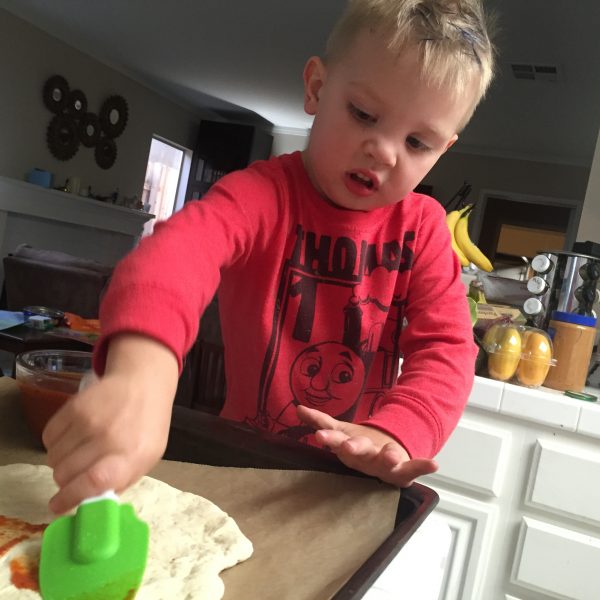 I mean, check out the utter concentration on this kid! I always do the dough to help it lie at an even thickness (we won’t talk shape. I like to describe our pizzas as ‘made with love’ and that is exactly what it ends up in – somewhere between a heart and a kidney shape.)

Lil’ Wonder has now graduated into doing the sauce AND cheese if he so desires – he gets really serious about it.

And Wonder Boy got to try out the pizza cutter after it was baked and cooled. 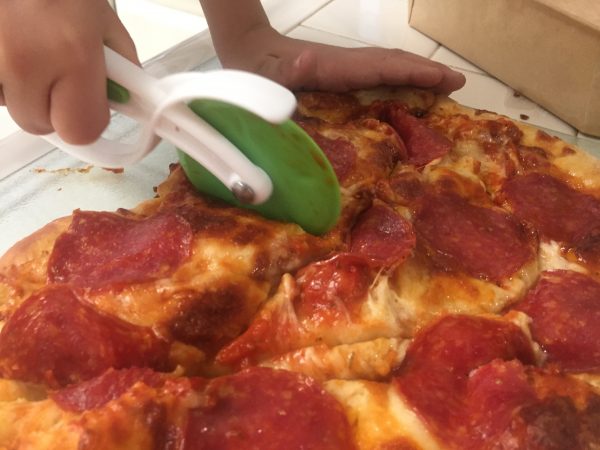 This cutter is amazing. He was cutting through it pretty good, and the blade, while cutting through the pizza after a couple trips (he wasn’t pushing down very hard) doesn’t hurt, even when you push down on it with your thumb like I tried.

And with that hand guard its pretty impossible for a kid to cut themselves with pizza.

The set includes a spatula ( we call it a spreader;) a pizza cutter and a server.

As the boys get more involved in the kitchen, I am keeping an eye out for more tools they can use to safely maneuver around pizzas, veggie snacks and baking. Curious Chef seems to have a lot of that stuff, including complete sets that could easily replace some of MY gear!

Do your kids cook in the kitchen with you? What do they make?