We signed up the boys for a summer sport camp at a nearby church.

I knew there would be some Bible talk, which is fine. I don’t have a strong church connection right now, but Wonder Boy has been active in Awana for a couple of years now.

I was thrilled to put them in something they could both participate in. I was thrilled Wonder Boy could have a chance at flag football in a non-competitive and supportive environment.

Lil’ Wonder had never been in a preschool environment on his own, so the whole week was a challenge for him in being in a room with 20 other kids his own age. He quickly made a ‘friend’ a volunteer who helped him transition to being independent in the program.

He ended up loving it. 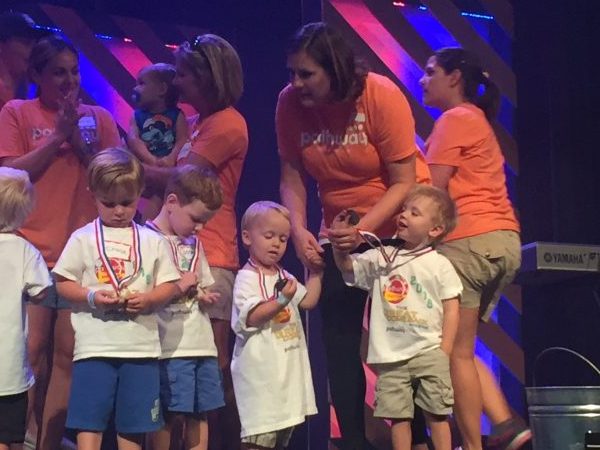 Wonder Boy is not the most aggressive player. He loves watching football and has often talked about playing, so I was happy he could at least learn some skills in a casual environment. We watched the ‘scrimmage’ at the end of camp and giggled at his blocking tactics that rivaled anyone on the Lakers, and watched him take a crash to the knee and keep going.

We constantly reinforce sports as fun competition in our family. I’ve heard too much about competitiveness at an early age and the last things I want is burnout because they weren’t great or poor sportsmanship from my two sons, who are very different athletically and personality-wise.

And for religion? I was raised going to Sunday School, but Sunday mornings are dear to our family when we can get them so we don’t actively go to church. But, my eldest went to a preschool at a church (a cute goldfish cracker snack time and painting a songs preschool) and goes to Awana at a friend’s church. And I’m sure Lil’ Wonder will do the same.

While its not a focus, I feel its important to learn about Jesus (who was an awesome dude) young, and carry that message of love and compassion, and when they are older they can discover their own truth.

And for learning sports at a church sports camp? He got affection, and care, and support without competition. He left standing taller and with a better spiral, and a better feeling of security about the world, even as it seems to rumble around us.

One day at LEGOLAND, the rest of the year free with a PlayPass One Small Thing – Let Kids Clean Safely