My pride in my eldest felt validated with those words, as he stood smiling next to his baseball coach this year, the familiar voice that had coached him through one of his biggest growing seasons as a player and as a person. 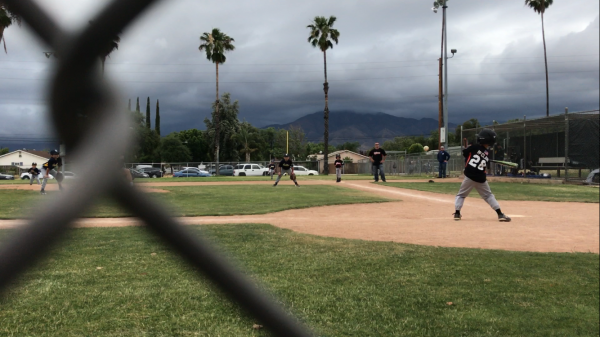 He’s grown in patience, attention span and confidence… and shown his true grit.

I felt angst over much of the season as we watched him improve practice over practice, and then strike out time after time at games. Sometimes he hit a crazy hard foul that would blow past the third base coach, a promise if what was to come.

But still, he persisted. He showed up.  He smiled. He cheered on teammates. He talked about the highlights of the game, sat as catcher often.

He quickly got over the tragedies of defeat, and went to talk to friends on opposite teams after his own team emerged victorious after 6 innings of battle.

Then, he started hitting. and making it on base.

His bravery can be hard to see, just like mine can be.

I sympathize with his lack of love for loud noises, as the vacuum cleaner was my mortal enemy when I was younger.

Fireworks still make him cringe, and his anxiety is both predictable and confounding at new experiences, or even old favorites.

But when he took a bat to the side of the head he just stood up and threw the ball back, unfazed, protected in the catchers’ gear that was a second skin for most of the innings he played.

That is the quiet grit he and I have, to keep going, being the support, doing the work in the background without reaching for glory, surprising everyone when its our turn to shine.

Our last game was a little bleak, with grey skies threatening rain, and the early excitement dwindled as the more consistent players struck out over and over, an off day with pressure and the promise of a pizza party clouding focus. A couple outs went by.

Then my son hit the ball and made it to first. Then the next kid, then the next kid. Chewing bubble gum victoriously, sliding in amid cheers of a crowd of parents who all felt pride at his success.

This is the son who walks in and orders how own food at restaurants. Who walking into an unknown business, in an unknown town, and asked for the bathroom. My son who happily deals with smaller children, letting go of toys, being the more patient one the more happy one, the forgiving one.

My son who dealt with two tragedies in quick succession with bravery and compassion even as his heart breaks.

Grit isn’t just the bravado of a cowboy in a movie or a football star. Grit can be quiet, and stubborn, and graceful.

And made it to first, then second, then home, his long legs catching up to the kid in front of him, his slide in celebration lingering just long enough.