dressing up for lactation class

Long story short, I suddenly had 10 minutes to get out the door, including getting Wonder Boy in his car seat.
I was in a pair of jeans and a grey nursing top from Target. Since I was heading to lactation class, I figured that would be just fine.
Added- cardigan- a long dark grey one from American Apparel. My long teal floral scarf from the Gap. and a pair of floral ballet flats, since they are easier to slip on than my Converse sneaks.

*insert crappy picture- no lets not. I did take a picture, but it is totally out of focus. No, lets. It’s entertaining to have illustrations, even though it’s not fashion-blog worthy. 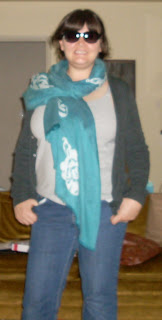 I had showered and then gotten busy with Wonder Boy, so hair wasn’t the best- I decided it was a bad version of Alice Cullen’s and left it alone. My very good buddy had said she liked it when it was slightly disheveled, so maybe non-with-funkyness can be my thing.

But yesterday, I don’t think it was working. I think the disheveled look will be harder than getting the time and just blow drying it smooth.

Anyway- so, lactation class. In I saunter, with the oldest kid and the biggest by a few pounds, and end up stripping everything- scarf and cardigan and ending up with a huge pile of stuff on top of the Diaper Dude diaper bag Mr. Wonder and I share.
But I still felt a little cool.