So a couple weeks with my toddler on nothing dairy didn’t make any change at all.

For the record, maybe a little TMI, we were trying a non-dairy diet because he’s always been a little lactose- intolerant, and I wanted to get his digestive system all primed up and ready to potty train.

I know you’re supposed to wait a little longer or something, but it just didn’t make any changes.

So now he and I are back to yogurt and cheese. But, we’ll be keeping a couple items that are just too darn useful.

Frankly, I couldn’t figure out vegan cheese for him that would be close enough to what the rest of the family was having, but I did score a couple good finds along the hunt. 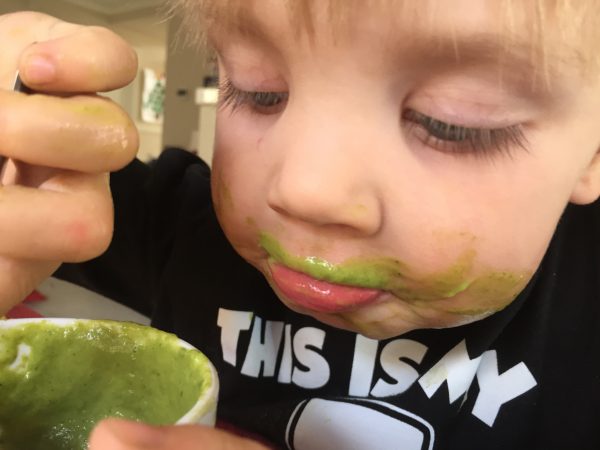 We also use coconut or regular water, coconut milk or almond milk in smoothies as well. We love avocados for a creamy texture and fat, this one came out really thick, so he ate it with a spoon.

Trader Joe’s by my house had blueberry yogurt made from coconut milk. It was thin, like every other coconut milk, but he liked it enough I could put him next to a yogurt my other son was having without jealousy.

Next, I had a hard time with the plain Soy Delicious coconut yogurt and making it into parfaits  (I hated the taste plain, he tolerated it) but it is good when used for salad dressings. So if you’re trying to make dressings or dips with less dairy, that is a good go to because it is seriously not good on its own in my opinion.

Also, I have been almond milk hunting and the best plain I’ve liked so far in the cheap box category goes to Trader Joe’s, followed by good old Almond Breeze. Now that it’s a staple, I need to understand more of what is going into then, but for now, especially the Trader Joe’s brand, I trust those two. We also rock the chocolate Silk almond milk on occasion – it’s really really good in coffee.