Ready to take him to the Happiest Place on Earth 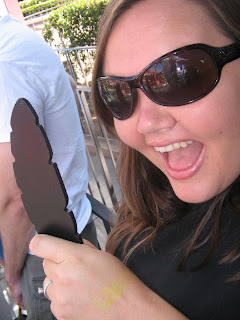 (This photo is me in line for Dumbo at Disneyland. I hadn’t ridden it in a million years, so Mr. Wonder and I went on it when we had early entry during our trip for our first anniversary. We stayed at the Disneyland Hotel… I was uber-excited. Yes, I was like that, and still am!)
Mr. Wonder and I have had annual passes for most of out 13-year-long relationship (yes, we have been a couple that long… married 4 years!)
We upgraded to Deluxe Disneyland passes last year so Mr. Wonder could go more. Of which we have gone… none times since Wonder Boy was born.
I’ve been ready for a month now, but things like weather and cold have been stopping us.
I was really excited to take him around Christmas time, but no, didn’t work out.
I really want to take Wonder Boy, like, this weekend, but we have a previous engagement. It’s just not working out.
The first time , I told Mr. Wonder, HAS to be with Mommy and Daddy. It’s just how it has to be. Just go for a while, look at the sights, maybe go on It’s a Small World or something.
My mom even renewed her annual pass so she could also go with us when we visited, so she could hold him while we went on rides.
*tapping feet*
I know there isn’t a whole lot we could do, just walk around, but I LOVE Disneyland. AS MR Wonder says, I just light up and have all of this energy when I go. I am totally one of those people that are young at heart, especially there. And you would think, as many time as I had been there, I would get sick of stuff. No, I get just as excited hearing the opening narrations of staying seated and keeping limbs in.
I am one of those that can say the opening sequence along with The Haunted Mansion; I know most of the skipper jokes on The Jungle Cruise. And yet, I still smile at all of them.
I don’t want Wonder Boy to be as experienced as my friend’s children. Yes, I want him to get to go often, but there is something about discovering new things at Disneyland that I want him to enjoy for years to come. The hidden Mickeys; the bronze spike that marked the center of Disneyland opening day; The many things hidden in rides that could be discovered still after many rides on the same ride.
Those experiences are what makes Disneyland magical to me, and they will make Wonder Boy’s trips magical as well.
Share this!

Just when I get him to sleep Why get done up when no one is home to admire you?