I’ve seen it on many blogs- Touring Tuesdays, Win it- Wednesdays, whatever.

I admit, for a blogger, having a predetermined theme would make it easier to blog, as you have a beginning idea for the blog (for instance, blogging about something you wish for in Wishful Wednesdays).

I considered it for a minute, and may go back to it. But right now, as the theme of my blog is, I am writing about my life and my friend’s more interesting (not always for the better) lives.

Of which I’ve been horrible at, since I barely see them.

But I have an idea for an entry, which is nice:)

I’ve also been struggling lately because Wonder Boy has been not taking longer naps. I’m actually part way through a decent afternoon nap (1/2 hour and counting) so I’m hoping I broke the cycle.

Of course, I am exhausted from playing with him or caring for him without a break all day. The minute I would sit down with food in my hands, he’d wake up squealing with delight or crying.

He squeals more than cries, and hasn’t lost his cheerful disposition, so I think he is still feeling just fine.

As I remember, my little brother wasn’t a big napper. After preschool or kindergarten was ‘quiet time’. In other words, laying in bed with a book or toy. 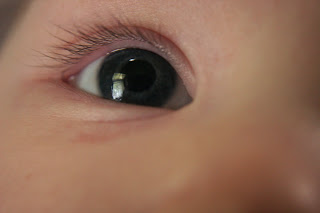 In other news, a lady today said Wonder Boy has my eyes.. I get the top half of the face, and Mr. Wonder gets the bottom half.
Since the debate has been going on for who he resembles most, since we only have my baby pictures to go off of, that I pretty much the compromise we decide on.
Except I think Wonder Boy’s eyes will be grey-blue like his daddy’s. I hope they will. I love my hazel eyes, but Mr. Wonder’s are a beautiful color.
Wonder Boy’s eye in this picture is darker than they usually look. I love that lens, lost it while I was pregnant and recently discovered it in the camera bag. Isn’t pregnancy brain great?

Why get done up when no one is home to admire you? 15 weeks